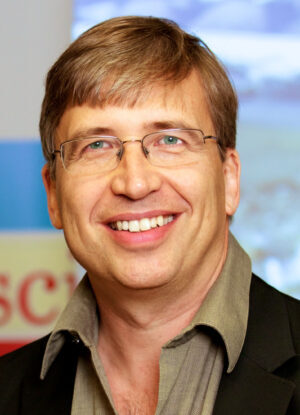 Autonomous mobile robots can now be used for a broad range of outdoor monitoring, surveillance, and transport operations. Driven by advances in robotics and the unbounded creative energy of researchers and entrepreneurs, the devices have begun to enter the human space in a big way. With technologies maturing rapidly, the coming generation of robots will dramatically extend human observational and operational capabilities, helping us manage national sovereignty and environmental resources and assisting our everyday living. Professor Gregory Dudek will touch on the deep advances in understanding the nature of intelligence that underlie advances in his field, as well as his own group’s research, the huge economic prospects for the development of mobile robots and the many regulatory, ethical and other challenges that accompany the arrival of these devices in our world.

Dr. Dudek works on robotics, intelligent systems human-robot interaction. He is the Director of the School of Computer Science at McGill University, Director of the NSERC Canadian Field Robotics Network, and James McGill Chair. In 2010 he was awarded the Fessenden Professorship in Science Innovation and was also awarded the Canadian Image Processing and Pattern Recognition Award for Research Excellence and also for Service to the Research Community. In 2008, he co-founded the company Independent Robotics Inc.